Just added to your cart

Adding product to your cart

PREORDER: Shipment arriving at our warehouse about Dec 19th (barring any delays). We expect all or most of the shipment to be presold by the time it arrives.

Compare to the Turin DF64E.

Difference between the Turin DF64 and the DF64P

The Turin DF64P Premium is a single dosing grinder that has rubber bellows that can be pumped at the end of the grinding cycle to force retained grounds out of the grind chamber. With this functionality there is less waste as there isn’t a need to purge coffee from the grind chamber prior to pulling a shot.

The DF64P has a small anti popcorn hopper and can be used to put your dose of coffee into after it has been weighed out. If you choose to use the grinder with this hopper you can grind your coffee without worrying about beans “jumping” very high when the beans hit the spinning burrs.

As with the Turin DF64, we will be offering optional burr upgrades to the SSP High Uniformity or the SSP Unimodal burr sets.

The 64mm burrs in this grinder will provide for outstanding particle size distribution, which is a very important aspect of making the best flavored espresso possible.

The grinder is designed to reduce clumping during the grinding cycle, which provides for a more even distribution of water during the espresso extraction process.

With the design of the top and bottom burr carriers, the distance between the burrs is designed to remain very steady and uniform throughout operation, providing for more uniform particle size distribution. With bottom burr being the one that is adjusted, the grinder can be taken apart and cleaned and put back together without messing up your grind size. It is also easier to clean the burr chamber compared to the Turin DF64 design, as cleaning involves simply removing two bolts with a metric hex wrench vs spinning a collar numerous times.

Wood accents have been added to this grinder to give it a premium look and feel. The lid on the grinder as well as the top burr carrier holder are made with wood.

This grinder will be sold in other countries with other names, such as Solo DF64P, G-iota DF64P and probably others.

The DF64P is a little different than the DF64E, but the build is quite similar, so this video will give you an idea of how it is put together.

Height: 11.5” without hopper or bellows

Height: 15.5” with hopper and bellows

P
Peter Bakalski
Overall great, with some things to consider.

I've really enjoyed the step up this grinder provided over my last setup. Really compact, sleek design with everything you need and nothing you don't. However it does seem like it needs some more refinements. It "walks" when grinding so I had to apply non-slip pads to it to keep it from moving around in the counter. The black coating also arrived slightly scratched in some places, and using your actual portafilter for dosing scratches the forks, no matter how careful you are. It still creates a bit of a mess, not nearly as much as the DF64, but with some RDT it's fine. Last design consideration is the number dial for the grind. The way it's built into the body there's a slight slip all around it, which lives to collect stray coffee grinds but it's very hard to clean. I would have happily paid another $50 for this grinder if it meant these issues could be resolved from the manufacturer. 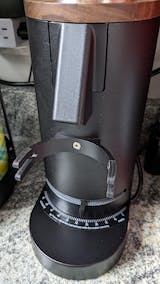 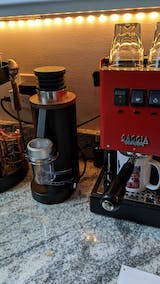 Awesome machine that gives me the perfect grind with near zero retention. Couldn’t be happier with this purchase. Quality at a very reasonable cost.